Researchers Hope Physical Activity Can Stem Growing Use of Medications 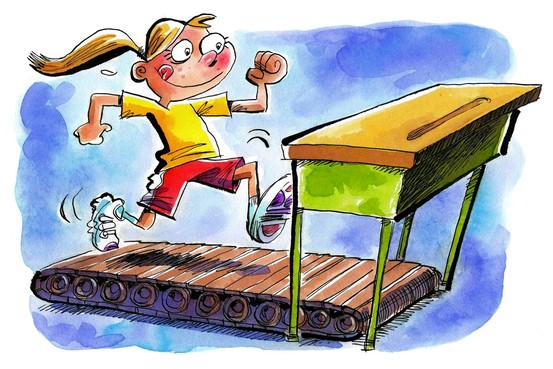 Researchers seeking alternatives to the use of drugs to treat ADHD in children are taking a closer look at exercise as a prescription.

It isn’t clear whether physical exercise offers particular benefits to children with symptoms of ADHD, since students with typical development also showed improvements after the sessions. Children with the condition have greater-than-normal difficulty paying attention and may exhibit impulsive behavior, among other symptoms.

Some doctors who specialize in treating children diagnosed with ADHD say they often incorporate exercise in the therapy. And some teachers have begun getting students up from their desks for short bursts of physical activity, finding it helps them pay attention to their studies.

“It benefits all the kids, but I definitely see where it helps the kids with ADHD a lot,” said Jill Fritz, a fourth-grade teacher at Rutledge Pearson Elementary school in Jacksonville, Fla. “It really helps them get back on track and get focused.”

Growing numbers of children in the U.S. have been diagnosed with ADHD. The Centers for Disease Control and Prevention calculated 11% of children had an ADHD diagnosis in 2011, the latest data available. That was up from 7.8% in 2003. Among all children in the U.S., 6.1% in 2011 were taking an ADHD medication, such as Adderall and Ritalin, up from 4.8% in 2007.

In a study published online Tuesday in the Journal of Abnormal Child Psychology, students in kindergarten through second grade did 31 minutes of aerobic physical activity before the start of school for 12 weeks. Another group of students engaged in a sedentary, classroom-based activity. The study, conducted at schools in Vermont and Indiana, involved 202 students.

The participants included children with typical development and others who were classified as at-risk for developing ADHD because of elevated symptoms of the disorder based on parent and teacher assessments.

The study found children in the exercise groups showed greater improvements in areas such as attention and mood than did those in the sedentary groups. The benefits of the exercise applied similarly to typically developing children as well as children with ADHD symptoms.

“This is the first large-scale demonstration of improvements in ADHD symptoms from aerobic physical activity using a randomized controlled trial methodology,” said Betsy Hoza, lead author of the study and a professor of psychological science at the University of Vermont. “This shows promise as a new avenue of treatment for ADHD but more work needs to be done before we know for sure if it really is,” she said.

Dr. Hoza described the benefits as “moderate” but said the results were comparable with what would be expected from an ADHD behavioral intervention with a trained professional.

Many schools have cut back on the amount of time devoted to recess and physical education because of increasing curriculum demands. Instead, some schools have implemented programs to encourage exercise among students either before or after school, or in shorts periods of activity throughout the day.

Ms. Fritz, the fourth-grade teacher, uses an online program called GoNoodle that leads students in what it calls “brain breaks.” She said she puts it on three or four times a day between study periods. A two-minute program might lead the children in forming letters with their bodies, and a 10-minute session might run through a Zumba dance routine.

GoNoodle, a Nashville, Tenn., startup, launched the program last year. It says the product, offered in both free and premium versions, is currently being used by 130,000 elementary schoolteachers.

Another classroom program, ABC for Fitness, helps teachers use short bursts of activity of three to 10 minutes to accumulate 30 minutes a day. Activities include jumping in place and doing squats. The program was developed by David Katz, co-founder of the Yale University Prevention Research Center, and is offered free to school districts through Dr. Katz’s nonprofit, the Turn the Tide Foundation.

ABC for Fitness was evaluated in a 2010 report published in the journal Preventing Chronic Disease. The study, which took place in Missouri, compared three elementary schools using the program with two other schools not using it. Among the findings: Schools that adopted the exercise program for most of the academic year had a 33% decline in ADHD medications used by its students. That compared with a smaller, 7% decline in medication use in the schools not using the program.

A similar study done with a larger sample size is currently under review, said Dr. Katz, who headed up the research teams on both studies.

Researchers at the University of Illinois at Urbana-Champaign examined the effects on attention and cognition from a single bout of activity. Forty children, age 8 to 10 years, spent 20 minutes either reading or exercising on a treadmill. After the tasks, the researchers measured the children’s attention and reading and math skills using computerized tests. They also measured electrical activity in the children’s brains.

After the tasks, test scores improved more for children who exercised than for those who were reading. Within the exercise group, children with ADHD symptoms scored better than the other children on one particular test that measured self-correction.

“Just 20 minutes of exercise of moderate intensity improved these core abilities to allocate attention and improved scholastic performance,” said Matthew Pontifex, lead author of the study and now an assistant professor of kinesiology at Michigan State University. The study was published in 2013 in the Journal of Pediatrics.

John Ratey, a clinical associate professor of psychiatry at Harvard Medical School and author of several books on ADHD, says he generally includes exercise in treatment plans. He recommends morning exercise for children, even something as little as running around or jumping rope. He said exercise can help reduce the medication dosage a patient is taking, or perhaps replace it altogether.

Dr. Ratey is a consultant to Reebok’s BOKS program, which leads 45-minute vigorous-exercise sessions three to five times a week at about 1,000 elementary schools across the country. “It’s for kids in general but it has a big effect for kids with ADHD,” he said.